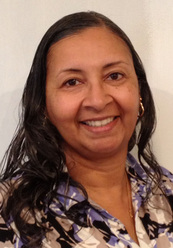 Dr. Reva Marcia Lewie Thompson was born and raised in Baltimore, Maryland. She graduated from Morgan State University with a B.S. in Mathematics and an M.D. from the University of Maryland. She completed her internship at Grady Memorial Hospital/  Emory University and her Diagnostic Imaging Residency at Howard University  Hospital. At Howard University Hospital she was Chief Resident during her last  year of training. Her clinical training continued with a Breast Imaging  Fellowship at the Indianapolis Breast Center. She has been Chief of Radiology at  Citizen’s Health Center, Mid Atlantic States Kaiser Permanente,  and Georgia  Kaiser Permanente. As a women’s imager, she practices medicine at Physicians  East in Greenville, North Carolina. At Pitt Community College, in Greenville, North Carolina, she is the Medical Advisor to the Mammography Program as well as a Pathology Instructor.

She recently completed her M.Div. at the School of Theology at Virginia Union. She attended the Howard University School of Divinity her first two years of the M.Div. program. She is a Licensed Minister  based  out of Greenville, North Carolina. Her passion is for  global missionary work, prison ministry, nursing home ministry, health initiatives, teaching, and community service. God has called her to lead Heal the People International Ministries. Dr. Thompson has served on the board of New Beginnings United Methodist  Church in Camden, New Jersey and The Ultrasound Diagnostics School in Atlanta, Georgia. She now serves on the Boards of the Pitt Community College Mammography Program in Greenville, North Carolina and The Urban Peace Campaign in Richmond, Virginia.  She is a regular guest on the Community Expressions Show hosted by Ms. Selena Crudup on Power 95 Radio in Rocky Mount, NC.

Her husband is Troy Hue Thompson,Jr., a pharmacist and missionary worker, and they have two adult daughters, Candice Maria Thompson and Captain Christel Thompson, one adult son, Troy Hue Thompson,III and one grandson, Troy Ali Thompson. Her latest writing project was coauthoring a book with her mother, artist  Reva Goodwin Lewie about her father, Tuskegee Airman Lemuel Arthur Lewie,Jr.  Most recently, she has launched a line of  her artwork called Art by MRC, featuring mixed media, predominantly textiles. Traveling, boating, book collecting, and  reading are hobbies that she never gets enough of. She also enjoys ministering  with, mentoring, and teaching others who have the Kingdom calling.  Her ministry  accompanies her as she travels, in response to her global  calling expressed in The Great Commission.